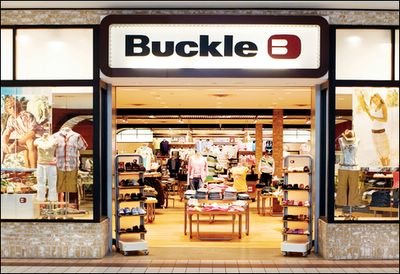 Let's face it, I'm not a Buckle girl!

Two years ago I won a contest through Buckle and that's where my saga with Buckle began, I received a letter stating that I won a Hoobastank surfboard, and autographed CD and a $50 gift card to Buckle.

The prize was valued at $500 which was *at the time* the biggest prize I had won! I was ultra excited, filled out and sent back all the necessary paperwork to accept my prize. Days go by turning to weeks, turning to months without a prize in sight.

During this time the first contact person said that my original surfboard was damaged enroute and returned to them so they have to create a new surfboard which after being assembled will then be autographed by the band which was then on tour in Europe.

After several of my e-mails and phone calls went unanswered and I had all but given up on this prize.

Ah, but the prize stated that I was also to get the autographed CD and a $50 gift certificate. That's when the second contact person came into the picture mentioning that the first contact person was fired and within a week after talking to her the CD and $50 gift card arrived.

Since I'm not a Buckle girl that gift card has been stuck in my wallet - only to see the light when I switch purses or wallets. Anytime I'd go to the mall, I'd walk past Buckle but there was never anything I liked so in time I forgot all about that poor Buckle gift card until the other day when it slipped out while I was reaching for another card.

So, I decide to check out the website. Since I'm between sizes, clothes are out of the question. They do advertise fragrances on their website. I'm guessing fruity florals? Not that there's anything wrong with fruity florals but do I really need another fruity floral fragrance?!?! They've got watches there but I don't wear a watch and I didn't like any of the bags on the site.

So, I'm fiddling around with the site and come across these shoes: 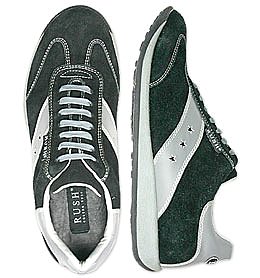 Ok, I have huge mother feet! Seriously, I have like the biggest feet known to man and wear a size 11 and sometimes an 11...and a half! Why I have flippers for feet is beyond me, I'm not even tall! So unfair!

But these shoes are on clearance and are marked down from $75 to $19.99. Where it pays to have huge mondo feet as a woman is when you find shoes made for men with smaller feet on clearance! So yeah, these were size nine men's shoes but for $19.99 I didn't care. I was going to use up my gift certificate anyhow so even if they didn't fit or they were just plain fugly, I wasn't out any money!

I then search around for things to add to the cart so I can use the entire balance on the card at once. Settle on a bunch of scarves and my total including tax and shipping comes out to $49.40 - Excellent!

Needless to say I was rather happy with what I had chosen, especially the shoes...until I received an e-mail about my order stating that my order had been shipped...............minus the shoes - which were now out of stock!

Bastardassbucklemotherfuckers! The shoes were the main reason why I placed the order! Would it have been that hard to contact me about my order and ask if I wanted to continue with my order?

Now I have $22.27 left on the stupid Buckle gift card and it costs $5 to ship another order so I'll have to either go to the store to use up the rest of the balance or place another order.

*Update: Buckle contacted me a few days after my I had placed my order that they found the shoes in stock and gave me the option of reinstating the order with free shipping! I told them to go ahead and reinstate my order and they did. The shoes are now in my possession! No way in hell are these shoes worth $79.99 - the sticker price on the shoes! They look like Payless shoes - no offense to Payless but yeah I'm glad I didn't have to pay out of pocket for these babies! Cheers to Buckle for finding the shoes!

Comments:
Oh, they suck. How could they not tell you that something you wanted is out and give you a chance to change your order? Bastards. Boo!

Hey Sali, great news they found the shoes in stock but stilla big Boo on them for not giving me the change to change my order before it was shipped!

Oh, yay!! I'm so happy you're getting the shoes you wanted. xoxo ;-D