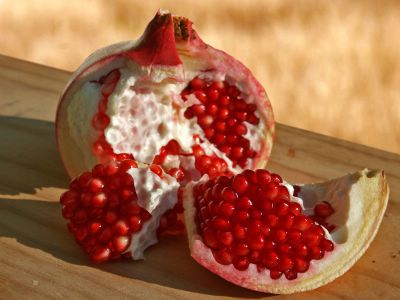 I've always loved pomegranates, my father's parents had a pomegranate tree in their back yard and I remember as a kid being taught to pick the pomegranate and then smashing it on the floor to break it open and eating it.

Demeter Pomegranate is described as: Our favorite pomegranate story, not surprisingly, is the Greek myth of Persephone. Hades abducts the beautiful daughter of Zeus and Demeter, our namesake, and carries Persephone to the Underworld. Tempted by the luscious Pomegranate, Persephone is made his eternal queen by eating its seeds, only able to return above ground for six months, her return heralding the arrival of Spring.

Given that heritage, Pomegranate by the Demeter Fragrance Library had to be great, and this one is, capturing all the freshness and deep, sweet flavor that tempted Persephone in the first place.

Demeter Pomegranate is incredibly tart and smells more like a bottle of POM Wonderful than an actual pomegranate.

I think this may well me my absolute favorite Demeter ever as the scent of pomegranate juice is very true, and the strength and staying power is absolutely amazing - especially given that it's a Demeter.

One drawback is that it when you first spray it, it doesn't smell as true as it does later in the day. It starts off more as a mixed berry scent and then morphs into a pomegranate juice fragrance. Still, I give it a thumbs up and would easily re-purchase this bottle.

Lily Lambert No. 77 is described as: Fresh and fruity, the main notes are simple and mouthwatering. Her intoxicating base includes pomegranate, and honeydew. A hint of Strawberry opens up into a main body of amber, and baby pink roses.

First off, I like all the notes mentioned in Lily Lambert No 77. I've mentioned many times not being particularly fond of melon in fragrances but I'm usually referring more to cantaloupe over say honeydew.

That being said, I was rather unsure if I'd like the honeydew in this fragrance. I HATE cantaloupe - both as a fragrance note and as a fruit. I refuse to eat it! I won't even eat cantaloupe flavored Jelly Bellys! Honeydew I like, honeydew's my friend.

Lily Lambert No. 77 starts off with subtle pomegranate which is muted even more by the honeydew as it warms to the skin. I was unsure as how those notes would smell together in a fragrance but I was pleasantly surprised! The strawberry and rose are more evident as the fragrance wears on. I'd classify this more as a fruity fragrance over a floral one because it smells like a mixed drink. I was able to detect the rose even more once I went out in the sun.

Lily Lambert No. 77 is more of a summer fragrance to me. I don't know, I'm unsure of what to make of it because I was certain that it would be the mixture of fruits in this fragrance that I wouldn't like, yet I do. It's the rose in here that seems a bit lackluster, perhaps if a different rose was chosen?

You want to know what image I get while testing this fragrance?

I'm sipping a Carpi Sun while wearing neon clothes and listening to NKOTB, in the corner of the room is a vase full of pink roses.

I mean it's nice, but it's nothing extraordinary.

Maybe my expectations were a bit too high fragrance but the rose kinda kills it for me - and I love rose!

I've been known to change my mind on fragrances when I test them in different weather so for now I'll give it a maybe for summer. The fruity I like, the floral needs to be worked on.

Comments:
I loved the Demeter Pomegranate when I smelled it at Sephora recently! In fact they must be selling well because they only had one bottle left. My first impression was that it was pleasantly sweet and juicy but not overly powdery like some pomegranate oils I've tried. Done well, I think pomegranate is easily one of my favorite fruit notes.

I love pomegranate, just love it! Demeter's is really nice, what suprised me the most about it was the staying power!