Beyond The Pale: Doxy 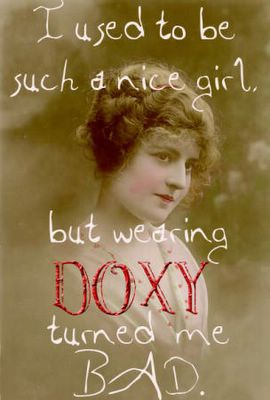 DOXY is described as a darkly fruity blend of blackberry, spice & all things VICE...

Juicy blackberries burst with warm hints of ginger, a sprinkle of cinnamon and musky vanilla. The freshness of bergamot whispers of more innocent times, but the richly aromatic, intensely carnal note of vetiver has its wicked way at last...

The etymology of Doxy: DOXY is a slang term that underwent a transformation from meaning 'doll' and 'little bundle', to 'wench' or 'sweetheart' - a term of endearment from a lover; to 'loose, licentious woman' or 'prostitute'. Typical! You must decide which of the definitions best suits you, my doxies. ;-)

Beyond the Pale's perfumes are hand-blended using pure, natural ingredients wherever possible, and the recipes are uniquely based on historic perfumes found in old Victorian journals and passed down through the generations.

I first mentioned Beyond the Pale back in June when I reviewed Mollisher's Mark. Several few weeks ago they had a pre-sale opportunity for full sized bottles so I put my order in for two bottles of Mollisher's Mark and also ordered Doxy and Flummery unsniffed.

I just adore spicy fragrances and Doxy sounded right up my alley as it combines spices and blackberries and I was hoping that it would be more of those notes and less of the others.

What does it actually smell like? Well, to be honest when I first applied it I hated it, it put me in a foul mood. I can't pinpoint what it is that I don't like about the initial application as I get a hint of plastic doll and cough syrup mixed together. That scent doesn't last long thankfully.

I really wanted this fragrance to have depth and found that it hits that peak an hour after application. The blackberry is the strongest of the notes, more of a deep berry scent than a fresh one. The spices are subtle and more evident up close to the skin. I would have liked the spices a bit stronger but don't feel that it's totally lacking in that category either. The sweetness of the scent is impacted by the vanilla but it isn't overly sweet.

The bergamot gets stronger as the blackberry slowly dissipates. Bergamot is one of those notes that I don't mind in small quantities, in theory I would have liked less of it in here but it really adds more depth to the fragrance.

The vetiver makes it's strongest appearance several hours after the initial application. By then, the other notes are mere hints. I had hoped that this would be more of a cold weather fragrance but the vetiver really makes it more suited to warmer weather.

The staying power of Doxy is very good as I could smell it on my skin the following morning and the scent is still evident on a blanket I used days ago.

I'm mixed on if I'd re-purchase this as I really love the scent when the berries and spices are at their height but find the rest of the fragrance a bit lacking.

Doxy retails for £9.99 and is available through Beyond The Pale. 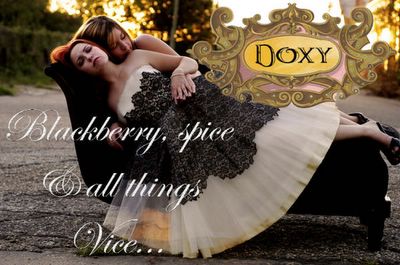