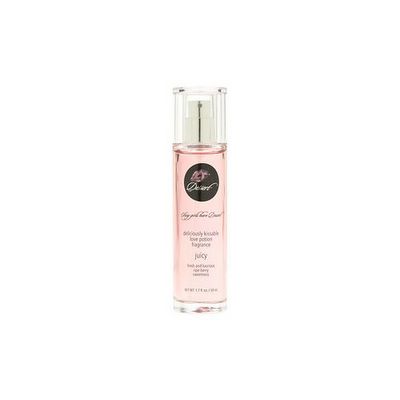 I originally tested Jessica Simpson's Dessert Beauty line when it was released two years ago. I felt that the products were ridiculous overpriced but made a note that the Juicy line was my favorite of the original three scents offered.

I won't front you now, I'll admit it. I recently bought a Jessica Simpson fragrance! Yeah, I bought Juicy!

I blame this on Kate Beckensale mind you as I read in In Style I believe that she keeps it on her nightstand - well, she was referring to a different scent but still it's from the same line. I put all the blame on her!

Do I lose some street cred now? Wait, it gets worse!

Described as: Dessert is unlike any scent experience you've had before. It's sensual, seductive and it smells provocatively delicious - fresh and juicy-sweet ... with sun-ripened strawberries and succulent raspberries refreshed by a subtle bouquet of crisp green. Dessert's mission is to make you completely kissable and impossible to resist. So spray it on, and invite someone you really like to move in close.

Okay now I have a confession to make. I consider myself a pretty smart person but am known to have an occasional lapse in judgment, what could easily be described as a "Jessica Simpson moment."

I had just spent an hour on the treadmill when I started thinking about what fragrance to wear post-workout shower. I settle on the recently purchased Juicy and after the shower I'm almost gitty with excitement.

I spray it on and it hurts, it physically hurts me! I don't know what type of juice is bottled in this thing but this feels like a minor attack with a Super Soaker.

I get over it and am now covered in a sweet berry scent, it actually smells like a mixture of Strawberry and Raspberry Kool-Aid, strawberry being the stronger of the two.

So, I'm in my pajamas watching movies and feel rather sticky, granted it's been fairly humid down here so feeling sticky isn't unusual but given the fact that I've just taken a shower I shouldn't feel sticky at all.

Shrug it off and watch movies until I start getting tired. Decide to get ready for bed and do my nightly ritual of brushing my teeth and washing my face, neck and decloté .

Right as I'm about to get under the sheets I spray a little bit of Juicy onto my arms and decloté to lull me to sleep and five seconds later I feel sticky all over again.

Now, I knew that the rest of the Dessert line - the powder, cream, etc..were lickablele but had no idea that the fragrance would be as well.

Seriously, no idea! I mean I should have had some clue when I read "Kissable Fragrance" but it still didn't sink in and I seriously thought there was no way that the fragrance was lickable as well.

So, I snapped, licked my arm to verify that it was indeed the case and sure enough *bam* I get it!

Lesson learned with such a small price to pay as Juicy was only $7.99 /1.7 oz at Marshalls.

Comments:
The lip glosses are the bomb!!! Not only is the texture good, thay taste good and smell good!