Last year my biggest wins were: Two one-year subscriptions to Netflix, and iPod Shuffle and an iPod Nano.

Check out what I won this year: a Sony PSP!

Um, I won a few other things this year as well but this has been the biggest. 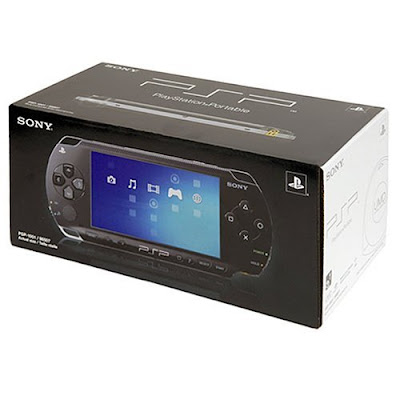 I don't even know how this thing works, nor do I have any games for it but it seems cool.

I was rather disappointed to discover that I can't play Tetris on this thing. I could seriously play Tetris for hours!

Hopefully they sell cool games for this thing. Back in the day my sister had the original Nintendo & Gameboy and I had the Sega game system and the portable Sega. I still have that portable Sega but only have two games for it.

I'm so not a gamer - I could never defeat Koomba.
To this day I am in awe of people who are able to defeat Koomba!

Comments:
I almost beat Pokemon a few years back! I'm not a gamer by any stretch, but I had a serious Pokemon addiction. For the pokemon, of course! I watched the show and had a huge stuffed Pikachu and bought the game (and played it) so I could have even more critters! I drew the line at the cards, and eventually gave it all away. I still love my Pika, though!

You need to get Lumines for the PSP - I'm a Tetris junkie (I currently use a Nintendo DS) but I used to have the PSP and Lumines was by far my favorite game. It's a fairly similiar type of game - you create squares or rectangles from the dropping pieces which then makes them disappear for points. It's got loads of different levels and patterns as well.

This program is for Tetris on the PSP