Talented and humble are two words that come to mind when I think of my friend Sali.
She mentioned that she was a singer when we first became friends...a singer...as if it were nothing big...a singer.

I sing in the shower, I sing on the treadmill and I love to sing karaoke.

My sister had a co-worker once who was a karaoke performer and even released an album of herself signing to karaoke tracks. In a delusional world - the two of us (myself and this karaoke performer) could consider ourselves singers.

Seriously, I cringe when I hear my own voice when retrieving the messages on my phone.

Honestly, if I had a voice like Sali's I would brag about it all the time! Humble wouldn't even know my name!

Fast forward to months after become a huge fan of her voice when Sali passingly mentions that she created a fragrance, Pink Manhattan. She even goes as far as mentioning that I may not like it but she would like my feedback on it.

I was not alone as it quickly became a cult favorite and was even picked up by several fragrance sellers.

Fast forward again to last year when Sali sent me a sample of a new fragrance she was tinkering around with. This untitled sample included three notes that I seem to be drawn to in many of my favorite fragrances: blackberry, pomegranate and sandalwood. 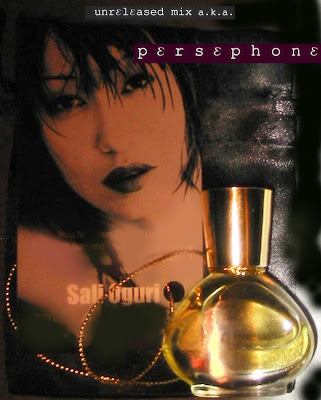 Needless to say, I was instantly drawn to this fragrance. The final product was changed only slightly from the prototype I tested.

In the bottle, Persephone smells like those chocolate covered berry creams that you get in a box of chocolates. Very tempting!

I first tested the final product on a very cold night as I was going out to dinner and wanted something that would cling to my skin.

On the skin, the dark chocolate dissipates making room for the blackberries. Not an overly sweet scent but rather one that's subtle and subdued until about an hour and a half after initial application when all of the sudden it becomes this warm, inviting and incredibly sexy fragrance.

This was when the sandalwood kicked in for me and the floral notes rose to the surface. This scent embodied what I liked the most about the prototype and couldn't have been a better fragrance choice for the weather.

The next evening, the weather was much warmer and I had been working out on the treadmill for an hour. I took a shower and applied Persephone, changed into some cozy pajamas and watched a movie.

This made me appreciate Persephone even more because it's one of those rare fragrances that has the ability to change. Another example of a fragrance that changes with the weather is Delrae's Bois de Paradis. I much prefer to wear Bois de Paradis in colder weather as it
has that extra sass that's missing with warm weather. The spices and fig seem to pop out more where they are lacking in warmer weather.

With the arrival of spring, the weather out here is very cold early in morning and late at night with warm afternoons. I have been dabbing Persephone all week long and have welcomed every note as the scent changes as the day goes on. It really is a beautiful blend and one that I have proudly added to my collection.

In so many ways, Sali is Persephone. She has the ability to adapt, to change, in the background or to take the lead.

Talented and humble are only two words of the million that can describe who she is, what she does and where she'll go.

Carded samples $6 each for a half-filled small vial, 2 per customer limit. 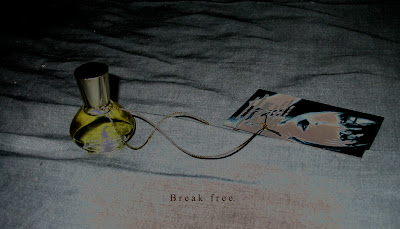 Comments:
Sand! Wow! Thank you! I hope you know that I'm eternally grateful for your friendship and that I don't take your kindness for granted! I'm very happy to hear that you like this one. I'll admit I've been wearing it myself (like right now) but I'm even happier that you've been wearing it. Thank you so much!

I love how you described it as a scent that changes because I feel what I love in in scent tends to have a chameleon quality, to be simple (as in not made of 250 notes but more like less than 25) yet complex (in featuring many aspects of what I love in scent, one of those aspects including the ability to adapt to seasons, occasions, our many moods and tastes). The matching music for this second scent is also coming this year but I think the same is true for my music--complexity and simplicity in one. You're right that it intensifies, so I would start with a drop at a time with this one. Persephone makes me feel good in a confident way, hopefully without trying too hard. Your review is simply out of this world and your beautiful description of it is far beyond what I could have prayed and hoped for. Thank you so much for your generous review.

About my voice--of course I can't always be humble because I'm supposed to be promoting myself as an artist as indies must do but maybe it's a bizarre human thing that I always cringe too when I hear my own voice, and it doesn't matter if I'm a singer or voice over talent or whatever--it's still one of those things I can't tolerate well. I do not enjoy hearing myself taped live, either. In my own head, my voice is just this annoying, grating timbre that only sounds bearable through digital processing (or the shower walls for the mighty reverb) to the point of not much recognition as myself. But now that I know you sing...:-) you must please tell me what your karaoke song is because I'm lookin' to get down on karaoke night with Sand sometime in this life.

Thank you for sharing in my dreams and helping make my dreams come true. I wish for all of your hearts' desires in this world to come true now and forever. I couldn't have done a thing to deserve your friendship--you are a gift!