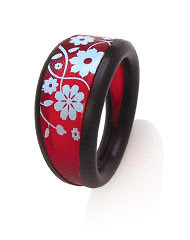 Did anyone notice yesterday's DailyCandy?

I love me some Switchrings but have to mention that the customer service there is rather sub par.

Back in October I was itching for some new designs to glam up my digits and placed an order for two packages of popularity and one package of USA (which is no longer on the site - but totally reminded me of wonder woman so I had to have it.)

Anyhow, after my order was placed, Switchring contacted me to say there would be a delay in my order as they were having packaging problems and that they'd ship in out in about a week and include an extra for my trouble.

No biggie for me, being rather patient. So I wait, one week - then two. Nothing!

Contact them again and they told me that the delay was longer than expected but they have already been sent out to me.

Meanwhile I've received other packages from Canada (where Switchrings are from) and England. Still no switchrings!

Then, exactly one month after I had placed my original order a package by the postal fairy arrives with a sticker labeled Switchring.

Open up the package and *sigh* notice that several of the outer bands of my switchring order and smashed and broken - unusable and unwearable!

*sobs* Contact switchring again and this time they sent a speedy replacement package with.....

open it up and *sigh part deux* again, smashed up outer bands!

At that point I didn't have the heart or patience to contact them again because it would totally seem like I one of those hard to please customers - which I'm totally not - but I could imagine them seeing me as one.

Even after all that heartache, I'm totally wanting to buy more! After all they have new collections like Solid Gold! The tiara in that collection looks very WW! I also love the Gotchies collection. And I need to have me some Bling!

Comments:
Hey Ombligo!
So sorry you had trouble with the rings. The post office can be awfully rough on packages. I had no idea the 2nd set was broken too!
I'm going to send you some of the new designs. Please let me know that they arrive ok.
All the best
Julie aka switchring