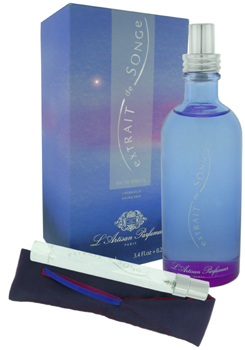 I must admit that I tend to overlook L'Artisan fragrances and don't try them often enough. After hearing raves about Extrait de Songe I was reluctant to cave in trying it but once Meg started raving about it I knew I had to try it.

I don't get any mint in here which I was thankful for and I've read notes of orange blossom in this fragrance but I don't smell orange blossom either. There is just a hint of rose. This fragrance is incredibly subtle with soft lime. I can swear I smell a hint of milk in here. The primary note on me is hay, think POTL but light, really light and a tiny bit of wood and musk. If you don't like hay in fragrances, odds are you won't like this one.

I never took much notice to how much I love the scent of hay but I adore it! Somehow, this fragrance reminds me of freshly washed clothes left outside to dry in the summer sun. Such a beautiful fragrance which is clearly meant to be worn during warmer months, but I think it's beautiful enough to spray year round. Without a doubt one that can be carried through from dawn to dusk. Ah, to the top of the wishlist this goes!

Extrait de Songe retails for $111/3.4 oz which also includes a refillable purse spray and is sold through Aedes, Beautycafe and Luscious Cargo. At Beautycafe you get 10% off with code MUA and free shipping over $80 bringing the final price down to $99.

Comments:
I get a lot of linden in the top notes, but no trace of rose or orange blossom, thank goodness. This fragrance is borderline girly for me, but I may still get it for summer. Such a lovely clean white musk drydown and the bottle is so gorgeous!

This is one L'Artisan that I am longing to try. Actually, it is rare that I find a LA that I don't like, my favorites being L'Orchidee Blanche, Tea for Two, Ambre Extreme and, Anais Fizz.

Thanks for the great review