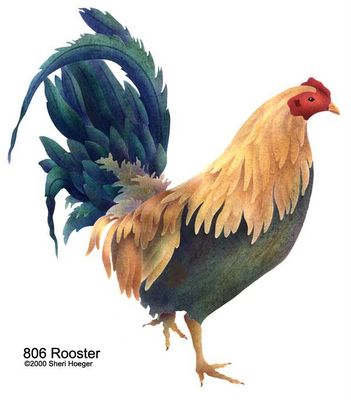 My sister was telling me last week how Denver County now has a ban on pit bulls. They have rounded up almost four hundred of the animals and have euthanized the majority of them. Clearly there has been a rise on human attacks by pit bulls but I don't know if that is really the answer. I was attacked once by a dog while walking to school years ago, but I don't have a personal vendetta against pit bulls myself. I do have a personal vendetta against roosters however.

Years ago someone in my neighborhood decided to get a rooster. There has to be a law against this somewhere as I always believed that you had to live in a rural area to have farm animals. Afterall, isn't a rooster a farm animal? I mean what use is a rooster in the city anyhow?

Anyhow, this fucking rooster every morning with it's fucking cock-a-doodle-doo over and over before the sun even rises. I once couldn't sleep and counted the seconds that it took before he started up again, before I knew it two hours passed by and still he didn't stop!

You'd think after the sun is out the rooster would stop! Oh no, fucking rooster keeps at it over and over again all fucking day long! I have no idea who owns the freaking animal but if I catch that stupid ass rooster I'm going to pluck the shit out of it!

Comments:
Yeah, I don't know who started the rumor that cocks crow at dawn and that's it. They crow all day and night and don't care if you hate it. After a week staying in a farm village with my family in the Philippines, what with the roosters crowing and the dogs barking, I realized that the idea that the country is quieter than the city is a lie.

Oh man, I can totally sympathize. I just moved to a bigger city (100,000+) and someone in my neighborhood has a damn ROOSTER! Why??

My husbands brother used to own about 200 roosters. He raised them to fight them. They all lived in the front yard of my husband's mother's house tethered to those igloo dog houses. I have been with my husband for 11 years. Needless to say -- I have only been to his family's house ONCE.

I have no problem with dogs barking, alarms going off or even the occasional stereo blasting at 2:00 A.M. but that rooster - UGH!!!